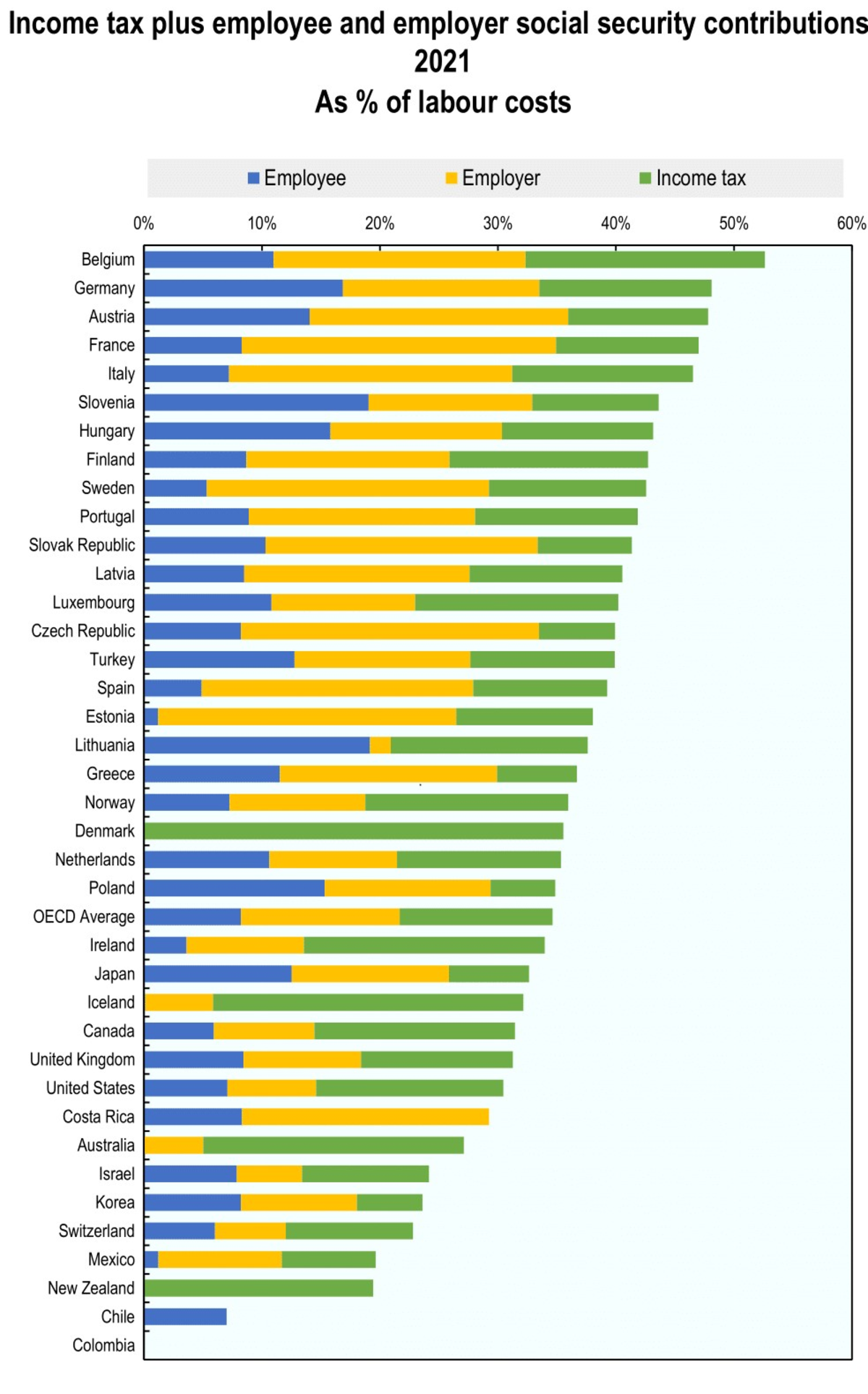 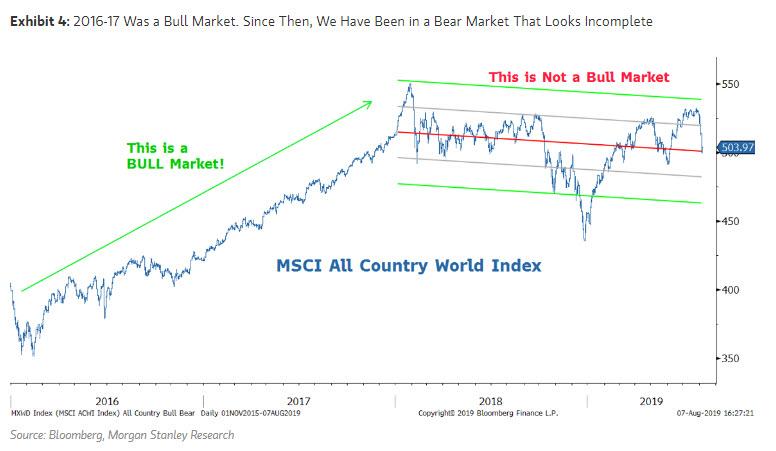 "A tax wedge is the difference between before-tax and after-tax wages. The tax wedge measures how much the government ostensibly receives as a result of taxing the labor force."

Unlike prior years, there was a distinct sense of dread and powerless foreboding in this year's Jackson Hole meeting, starting with Jerome Powell's "boring" speech in which he blamed Trump's trade war for the Fed's inability to stimulate the economy, and culminating with Mark Carney unprecedented capitulation, effectively admitting that the fiat system has failed and the dollar can no longer be the world's reserve currency (instead punting that obligation to 'global central banker' Mark Zuckerberg and his Libracoin).

Indeed, as even the FT concludes, "there was a sense that things will never be the same again."

In its summary of this week's Wyoming outing, the FT also wrote that "the developed world had experienced a “regime shift” in economic conditions, James Bullard, president of the St Louis Federal Reserve, told the Financial Times.

And as the FT further admits, "interest rates are not going back up anytime soon, the role of the dollar is under scrutiny both as a haven asset and as a medium of exchange, and trade uncertainty has become a permanent feature of policymaking."

In short, central bankers "acknowledged they had reached a turning point in the way they viewed the global system. They cannot rely on the tools they used before the financial crisis to shape the economic environment, and the US can no longer be considered a predictable actor in economic or trade policy — even though there is no imminent replacement for the US dollar in sight."

While long overdue, the blunt introspection by central bankers was unexpected: a paradigm shift in perception and self-appraisal usually takes place after years of failure - such as that observed ever since the financial crisis, where instead of sparking an economic rebound, central bankers only made the rich richer by creating hyperinflation in fiancial assets while keeping wages and incomes for the vast majority subdued, and inspired the greatest wealth and income divide in history, culminating in such 6-sigma events as Brexit, Trump, and the populist revolution observed across most of Europe.

Although in retrospect, what happened this weekend in Wyoming should not have been a surprise. After all, this year the symposium has an appropriate catch-all topic: "Challenges for Monetary Policy", and as Deutsche Bank's Alan Ruskin said "rest assured there are challenges aplenty" adding that "arguably the basic framework for monetary policy is facing its greatest challenges since the 1970s, when the Keynesian Philips curve framework was succumbing to the Monetarist and rational expectations critique."

Ironically, and in polar opposition to today, the debate in the second half of the 1970s was how to conquer inflation, when the short-run trade-off between unemployment and inflation was giving way to a vertical long-run Philips curve, where there was no trade-off in growth and inflation. Now the debate is exactly the reverse: how to create inflation when the Phillips curve appears to be flat! Indeed, the basic inflation framework may have lost much of its appeal, which means that the entire "conventional wisdom" upon which bankers have relied for decades has been turned on its head.

So having effectively admitted that they can no longer be replied upon to pull the world out of the next recession, with the BOE's Mark Carney going so far as to admit that central bankers will be responsible for not only the next crisis, but the next war, something we have argued for the past decade, when he said that "past instances of very low rates have tended to coincide with high risk events such as wars, financial crises, and breaks in the monetary regime" - incidentally, the same low rates that for years central bankers said would save the world and now we learn have doomed it instead, below are 20 blunt questions (with a few implied answers in the questions themselves) for Central Bankers, courtesy of DB's Alan Ruskin, as they prepare to be swept away by the tsunami of history:

1. If the Philips curve is so flat, and there is no serious alternative model to explain/forecast inflation, is inflation targeting even feasible? What are the intermediate targets to hit the end inflation target?
2. If goods Inflation drivers are dominated by global variables like international growth/capacity, how can a Central Bank that influences country specific variables pretend to target inflation?
3. If Central Banks hit the inflation target is that 'the be all and end all'? The Fed did a particularly good job hitting its inflation target in the years before the Great Financial collapse in 2008 - what does that say about inflation targeting creating stability?
4. Central banks are great at creating asset inflation to which they pay lip-service, but they target goods and services inflation they struggle to create. Asset inflation that supports growth is welcomed. What are the long-term repercussions of an asymmetric bias in favor of asset inflation? As this asymmetry fans wealth/income disparity, does it matter, or, is this the least worst only solution? Who will be left exposed when the asset tide goes out again?
5. Is it the Central Banks job to do away with business cycle? And at what price? Are we witnessing the great moderation interspersed with a great collapse in confidence and wilder big credit cycle, and greater long-term misallocation of resources?
6. Can inflation be measured accurately enough to warrant distinguishing between core inflation +/-0.25% either side of target? Similarly, on hedonic pricing, how relevant to a consumer is it, that a tech device is worth a fraction of its price a decade ago when adjusted for functionality, but in practice may cost more than the old device when not quality adjusted? Is hedonic adjusted inflation indices the relevant denominator for assessing real interest rates and real money supply?
7. How is it best to measure the real cost of money? The real cost of buying a house should be based on expected house price (asset) inflation. Higher asset inflation reduces the real cost of money creating pro-cyclicality.
8. Are we reaching a natural end to the secular decline in inflation and rates that has propelled the asset cycle in the last 40 years. Has asset inflation hidden an even more meaningful deceleration in the natural rate of growth that will evident in the next decade?
9. How much are Central Banks going to be complicit in a collapse in fiscal standards, by buying public sector assets? Will a passive Central bank simply accommodate and facilitate fiscal actions related to MMT? What is the Central banks future role in pushing back against modern monetary theory.
10. How much has the unprecedented collapse in the term premia in bond market brought forward the impact of monetary policy that will support US growth in the next 6 – 12 months, but leave much less Fed capacity to ease financial conditions in H2 2020 and 2021?
11. Is ‘Japanization’ the fate of most advanced economies? How different to Japan is the rest of the developed world when their demographics turn? Do these demographics lower both the natural rate of growth and equilibrium interest rate over the cycle as seems likely?
12. Japan’s yield curve targeting has seemed to be a relative success, how would this fit in the US context. What will get the US/world out of a zero/negative rate funk? Or is that simply the future?
13. Is modest goods deflation (say -1% y/y) bad, especially when in any year a certain amount of deflation reflects technical progress? Japan per capita income strength suggests relative stable modest deflation may not be as negative for growth as assumed?
14. At what negative rate does aggregate demands interest rate elasticity turn positive? As developed countries age, are low interest rates an even less effective policy mechanism for a growing population searching for stable sources of income?
15. Will the Fed/ECB buy equities/ETFs? How far are central banks willing to distort underlying value, or is distorting value intrinsic to Central Banking as per the Austrian critique? Do the distortion to the price/quantity of credit matter in the longer-term, or, will they contribute to lower trend growth? What misallocation or reallocation of resource have unorthodox policies already caused?
16. Is r* a broken clock that is right every 24 hours, or a more useful concept? Is r* as described by the FOMC dots, really better described as 'peak r', and why does the Fed not acknowledge there is no stable l/t interest rates, and rates have their own cycle?
17. What is the message that we can take from record low term peremia, but a 10y risk neutral rate that is estimated to be surprisingly high near 2.8%?
18. Central Bank in a world of deglobalization, or at least a cold war in the tech sector. Will the natural rate of growth (y*) get more depressed? Has the global economy moved beyond the easiest phase of EM growth catch-up and increased financial intermediation? Are deglobalisation/environmental degradation factors to consider?
19. Money supply: why is this getting close to no attention? M1 has been sending important leading indicator signals for all of the US, the EUR area and China. M1 has been sending the same corroborating leading indicator signals as the yield curve, yet nobody talks about money supply. Again this is another complete reversal from the late 1970s.
20. Currency Wars? What are the circumstances when the Fed should not join White House inspired intervention? What are the Fed (and Treasury’s) views on accumulating CNY assets? Do other major Central banks have any aversion to holding CNY currently?