zee
Linux: Be Root, Windows: Re Boot
Giant Amazon and Google Compute Cloud in the Sky. 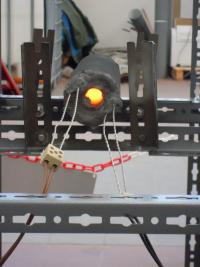 • University of Uppsala measured nickel and copper compounds in Rossi-supplied used ECat catalyst. Swedish physics professor Kjell Aleklett stated that copper isotope ratios were found to be the same as in nature and not what would be expected from a fusion reaction. Also, the percentage of copper was too high for any known nickel reaction.

• Kullander and Essen’s trip to witness an ECat demonstration was paid for by Rossi.

• Rossi claims that there is a self-destruct mechanism on the E-cat fusion reactor that prohibits unauthorized inspection of the internals.

• Rossi has five criminal convictions including two jail terms for the ‘sheik of Brianza’. Rossi was a fraud.

• Petroldragon was a failed venture. Despite claims of technology that converted waste to oil, there is no evidence of any oil production.

• Thermoelectric converter technology provided for the U.S. Department of Defense was a failure. Only eight of twenty-seven devices functioned. They produced 1 watt of power versus the 800 to 1000 watts claimed. Later devices produced no more than regular devices commercially available.

• Rossi has a fraudulent degree from fraudulent Kensington University.

• Rossi claims that the ECat is ready for commercialization, yet he appeals to folks to come up with a cold fusion plant design that he will pay for. He wants it to cost around 500 Euros per kW. He needs it in the next two months.

• NASA study shows that steam production from a Rossi demonstration could come from electrical heater input.

• Julian Brown from the European Patent Office was a Rossi supporter. He witnessed an ECat demonstration and concluded that the ECat technology wasn’t real.

• Rossi calls detractors ‘snakes and clowns’, some paid, with various despicable agendas. He states that he is being blackmailed.

• Rossi has had at least twelve ‘demonstrations’, none of which have credibly demonstrated the ECat technology.

• The October ECat demonstration weight measurements were determined by a bathroom digital scale calibrated by two men who knew their weight.

• All of Rossi’s demonstrations are witness tests. Rossi runs them. Guests watch or participate under Rossi’s supervision. There are no known independent third party tests.

• Conclusively validating ECat energy generation is easy, yet Rossi has never allowed it.

• Despite claims of continuous operation for days, weeks and months, actual demonstrations have only lasted for hours.

• The Defkalion partnership with Rossi ended up a fiasco.

• The claimed major American investor and 1 MW demonstration in the United States ended up as a fiasco.

• There are no known ECat collaborators. Close colleague Focardi states that he has no knowledge of key ECat technology. Rossi has made it clear that the ECat is his show and no one else. Rossi also states that in the event of his death, he has organized ECat commercialization to continue.

• Despite claims of huge ECat energy release, even the most optimistic interpretation of demonstration data shows modest energy.

• Rossi thinks that he can easily send fusion reactors to the United States with no Customs or government issues.

• Rossi’s pretentiously named Journal of Nuclear Physics in reality is his own personal blog. He claims that papers published on his blog are peer-reviewed.

• Despite supposedly being consumed by his ECat work, Rossi spends a lot of time on his blog.

• One of the advisers for the Journal of Nuclear Physics is Michael Melich. Melich styles himself as a covert intelligence agent tasked by the U.S. government to promote and keep an eye on cold fusion.

• Rossi’s blog is heavily moderated to screen out posts that ask tough questions.

• With the exception of one Italian patent, Rossi has been unsuccessful getting ECat patents.

• Large heat release from nickel in a hydrogen atmosphere has been known in industry for over 50 years. ‘Anomalous’ heat from nickel/hydrogen reactions was first recorded in 1936.

• Rossi (and Focardi) have been unsuccessful in getting published in mainstream peer-reviewed scientific journals.

• Despite numerous statements of ECat testing at Universities of Uppsala, Stockholm and Bologna, no tests have taken place to date.

• Rossi claims that an ECat installed in 2007 operates 24 hours a day providing heat to the EON factory at via Carlo Ragazzi 18 in Bondeno. EON is owned by Rossi. Rossi also claims he is producing hot water in his home with an ECat. There has been no independent confirmation of either application.

• Despite claims of successful, continuous operation at EON, the ECat did not run in September 2011 in front of NASA and a potential third party investor during a two-day period.

• Rossi says he has received no compensation for his ECat yet AmpEnergo is said to have granted money to Rossi.

• Rossi claims that once he gets proceeds from ECat sales, 50% of the money will be used for expansion and 50% to treat children with cancer. Rossi says he will personally look for families who cannot afford the treatment for their children.

• Rossi claims that his ECat will use Stirling engines to produce electricity despite the fact that the largest known Stirling engine is only 0.75 MW.

• Professor Peter Ekstrom of Lund University calls Rossi’s invention a scam and pseudoscience. His statement is based on the unlikelihood of a chemical reaction being strong enough to break the Coulomb barrier, the lack of gamma radiation, the lack of explanation for the claimed excess energy, the lack of expected radiation after fusing a proton with nickel, the unexplained presence of 11% iron in the spent fuel, and the fact that the 10% copper in the spent fuel had the same isotope ratios as natural copper. He also questioned the steam velocity and the possibility of liquid water in the ECat outlet tube.

• Nuclear chemist Camillo Franchini says that the Energy Catalyst can’t work properly because it doesn’t follow the laws of physics.

• Rossi was caught on-camera at the electric input controls during a Mats Lewan demonstration.

• The majority of ECat demonstrations only include specifically Rossi invited guests.

• Rossi says he was collaborating with National Instruments. NI said they weren’t.

• Rossi said that the eCat from his end-October 2011 ‘demonstration’ was sold to a secret customer, delivered to U.S. with the installation being supported by Rossi. This eCat hadn’t moved by January, 2012.

• The representative of the ‘secret customer’ who validated Rossi’s eCat in October, 2012 (the infamous NATO colonel), turns out to be an old Rossi crone from the Petroldragon days.

• Rossi’s approach to scamming folks by selling licenses is revealed in Australia.

• Believers tout Kullander as a Rossi supporter. He was supposed to issue isotope analyses in late 2011. We’re still waiting.

• These manufacturing facilities are supposed to be producing a million eCats in 2012. Other than ‘Rossi says’ there is no evidence of production anywhere.

• Rossi touts having a working relationship with Siemens. Siemens says nothing.

• In summer of 2012, the University of Bologna again denies working with Rossi, contrary to Rossi’s claims.

You are perfectly right: in fact we are designing the new 1 MW plants, for hot temperature, and the dimensions will be those of a cylinder with a diameter of 1.2 m and a lencth od 0.4 m.
Is shocking, I myself are surprised, but it is so.

Torej cilinder s premerom 1.2 metra in dolžino 40 cm. Says Andrea Rossi :) Is shocking, he himself are surprised, but it is so :))

Ture, but he's still a fake!

"A group of Swedish private individuals since the summer preparing an investment in the controversial energy invention E-cat. Now halted investment because the technology did not work in a test last week.
no heat energy is found beyond the input electrical power.
Investor Group had instructed the SP Technical Research Institute of Sweden , to monitor the measurement, and the researchers who attended measuring an input electrical power that was two to three times higher than Rossi himself measured. The measurement used the SP called True RMS instruments."