Thousands of Occupy Wall Street protesters swarmed the Brooklyn Bridge Saturday, shutting down car lanes and setting up yet another tense showdown with the NYPD.

Roughly 700 people were arrested after standing in the roadway, blocking the Brooklyn-bound lanes. Traffic in the opposite direction was slowed -- but still running after the 4 p.m. standoff.

An army of cops swooped in after the demonstrators took over the bridge's pedestrian walkway and flooded onto the car lanes heading to Brooklyn. The showdown halted traffic on the bridge for nearly three hours.

While some of the protesters claimed cops set a trap for them, NYPD spokesman Paul Browne insisted the arrests came after the demonstrators were warned multiple times to stay off the roadway.

"Some complied and took the walkway without being arrested," Browne said. "Others proceeded on the Brooklyn-bound vehicular roadway. The latter were arrested." 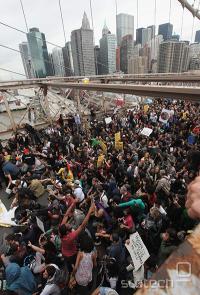 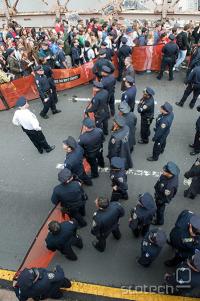 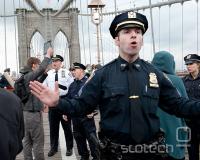 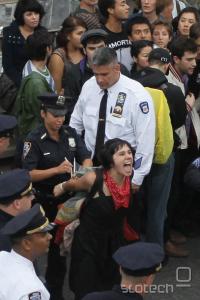 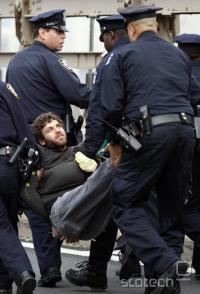 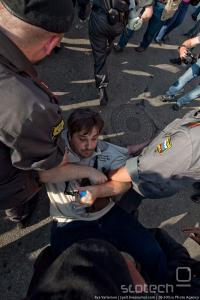 Neumnost.
On the journey of life, I chose the psycho path.

Ni res. Bailoutiu so posledica šibke države, ki je pokleknila.
On the journey of life, I chose the psycho path.

.
Silly Rabbit, Trix are for Kids

"From the very outset of his rule, Hitler, whose main short-term goal was the economic revival of Germany with the help of German nationalist bankers and industrialists, won popular support of the nation. Hitler adopted an aggressive full-employment campaign. Between January 1933 and July 1935 the number of employed Germans rose by a half, from 11.7 million to 16.9 million. More than 5 million new jobs paying living wages were created. Unemployment was banished from the German economy and the entire nation was productively engaged in reconstruction. Inflation was brought under control by wage freeze and price control. Besides this, taking into account the lessons learned during 1914-18, Hitler aimed at creating an economy that would be independent from foreign capital and supply, and be well protected from another blockade and economic war. For Germans, all of the above was proof that Hitler was the one who had not only brought Germany out of economic depression but would take it directly to prosperity with new pride. German popular trust in the Fuehrer rose dramatically.

In September 1936, British economist John Maynard Keynes, whose ideas had been credited as behind US president Franklin Roosevelt's New Deal, prepared a preface for the German translation of his book, The General Theory of Employment, Interest and Money. Addressing a readership of German economists, Keynes wrote: "The theory of aggregate production, which is the point of the following book, nevertheless can be much easier adapted to the conditions of a totalitarian state, than ... under conditions of free competition and a large degree of laissez-faire. This is one of the reasons that [justify] the fact that I call my theory a general theory. Although I have, after all, worked it out with a view to the conditions prevailing in the Anglo-Saxon countries where a large degree of laissez-faire still prevails, nevertheless it remains applicable to situations in which state management is more pronounced." Keynes clearly understood that the greater the degree of state control over any economy, the easier it would be for the government to manage the levers of monetary and fiscal policy to manipulate macroeconomic aggregates of total output, total employment, and the general price and wage levels for purposes of moving the overall economy into directions more to the economic-policy analyst's liking.

The radical Spartacists in Germany regrouped themselves as the Communist Party in 1920. They continued their opposition to the liberal government of the Weimar Republic. From 1923-29, the Communists always obtained about 10% of the seats in the Reichstag. Unlike elitist Italian Fascism, Nazism had a high regard for the German peasant. Unlike Fascist Italy, Nazi Germany, while imposing sweeping government control over all aspects of the economy, was not a corporate state.

In four short years, Hitler's Germany was able to turn a Germany ravaged by defeat in war and left in a state national malaise by the liberal policies of the Weimar Republic, with a bankrupt economy weighted down by heavy foreign war debt and the total unavailability of new foreign capital, into the strongest economy and military power in Europe. How did Germany do it? The centerpiece was Germany's Work Creation Program of 1933-36, which preceded its rearmament program. Neo-liberal economists everywhere seven decades later have yet to acknowledge that employment is all that counts and living wages are the key to national prosperity. Any economic policy that does not lead to full employment is self-deceivingly counterproductive, and any policy that permits international wage arbitrage is treasonous. German economic policies between 1930 and 1932 were brutally deflationary, which showed total indifference to high unemployment, and in 1933 Hitler was elected chancellor out of the socio-economic chaos.

Hitler told German industrialists in May 1933 that economic recovery required action by both the state and the private sector. The government's role was limited to encouraging private-sector investment, mainly through tax incentives. He expressed willingness to provide substantial public funding only for highway projects, not for industry. Investment was unlikely if consumers had no money to spend or were afraid because of job insecurity to spend money to buy products produced, and Hitler understood that workers needed decent income to become healthy consumers. Thus full employment was the kick-start point of the economic cycle. To combat traditional German fear of the social consequences of appearing better off than their neighbors, Nazi propaganda would psychologically stimulate the economy by developing a lust for life among consumers.

Hitler stressed on May 31, 1933, that the Reich budget must be balanced. A balanced budget meant reducing expenditures on social programs, because Hitler intended to reduce business taxes to promote needed private investment. To avoid reducing social programs, a large work program without deficit spending had to be financed outside of the Reich budget. Hitler resorted to "pre-financing" (Vorfinanzierung) by means of "work-creation bills" (Arbeitsbeschaffungswechseln), a classic response of using monetary measures to deal with a fiscal dilemma.

Under the scheme of "pre-financing" with work-creation bills, the Reich Finance Ministry distributed these WCBs (three months, renewable up to five years) to participating credit institutions and public agencies. Contractors and suppliers who required cash to participate in work-creation projects drew bills against the agency ordering the work or the appropriate credit institutions. These credit institutions then accepted (assumed liability for payment of) the bills, which, now treated as commercial paper, could rediscount the bills at the Reichsbank (central bank). The entire process of drawing, accepting and discounting WCBs provided the cash necessary to pay the contractors and suppliers. The experience of successful rollover every three months quickly established credit worthiness. The Reich Treasury undertook to redeem these bills, one-fifth of the total every year, between 1934 and 1938, as the economy and tax receipts recovered. As security for the bills, the Reich Treasury deposited with the credit institutions a corresponding amount of tax vouchers (Steuergutscheine) or other securities. As the Treasury redeemed WCBs, the tax vouchers were to be returned to the Treasury. Hitler increased the money supply in the German economy by creating special money for employment.

In the US Banking Panic of 1907, J P Morgan (1837-1913) did in essence the same thing. He strong-armed US banks to agree to settle accounts among themselves with clearinghouse certificates he issued rather than cash and thus illegally increased the money supply without involving the government, and ended up owning a much larger share of the financial sector paid for with his own paper, ironically with the gratitude of the government. The difference was that the economic benefit went to Morgan personally rather than to the nation as in Nazi Germany and the private money was used to save the banks rather than to save the unemployed.

Nazi economic experts understood that sovereign credit creation for purposes of job creation posed no inflationary threat and that it would be a far more responsible policy than the conservative approach of tax increases and welfare cuts to balance government budgets. The idiotic policy of monetary restraint and social-spending reduction to balance government budgets in order to pay foreign debts is still being advocated by the International Monetary Fund (IMF) in debtor nations around the world - except for the United States, the world's largest debtor nation, which uses dollar hegemony as an escape hatch or, more to the point, escape hedge. Redeeming WCBs did burden the 1934-39 Reich budget, but the decline in Reich expenditure for welfare support and other tax subsidies as a result of full employment recovery more than offset the redemption payments. The surplus was then used to reduce public debt and taxes further.

There were legal, political and institutional restrictions unique to Germany on the scope of the Reichsbank that virtually dictated resources to WCBs as a way of putting 6 million unemployed Germans back to work. But the principle of WCBs can be applied to the US or China or any other country today to combat unacceptably high levels of unemployment. Alas, this common-sense approach is faced with firm opposition rationalized by obscure theories of inflation in most countries. The real reason is that the banking sector can reap excess profit by treating high unemployment as an externality in the economy that translates high unemployment and low wages directly into corporate profits. The profit from high unemployment is kept in private hands, while the cost of high unemployment is socialized as government expenditure.

In 1933, Hitler sought to reassure Germany's business leadership that Nazi rule was consistent with the preservation of the free-market system, because he needed the support of the industrialists. He could buy that support by keeping wages down during the recovery, but any rigorous effort to curb prices and profits would alienate the business community and slow down economic recovery. Instead, Hitler sought to restore profitability to German business through reduced unit cost achieved by increasing output and sales volume, rather than through a general increase in prices (Mengenkonjunktur, niche Preiskonjunktur - output boom, not price boom). Adoption of "performance wage" (Leistungslohn - payment on a price-rate basis) increased labor productivity, thereby driving costs down and profit up. Some upward price movements were permitted to adjust price relationships between agricultural and manufactured products and between goods with elastic and inelastic demands, also to prevent price wars and below-cost dumping. These principles of "output boom, not price boom" and "performance wage" could also work in combating inflation today in many economies generally and China specifically.

Hitler saved the German farmers from their heavy debt burden through relief programs and through subsidized farm prices. The stable farm income came at the expenses of the middlemen institutions, but Hitler sustained popular support by the provision of living income to consumers. Had Nazi Germany been a member of the World Trade Organization (WTO), this option would have been foreclosed to it. Hitler sought price stability only in sectors critical to the national economy and to the ultimate goal of rearmament. Germany had no overall price policy until the 1936 Four Year Plan, which concentrated economic authority in the hands of Hermann Goering for war production and put an end to regulated free-market policies.

Business managers generally make investment and employment decisions based on their judgment of the prospect for new orders. The difference between German economic recovery under Hitler and US economic stagnation under Roosevelt in the 1930s was the degree of uncertainty for new orders for goods. Hitler made it clear that after 1936, a major rearmament program would make heavy demand on German durable-goods and capital-goods industries without the need to export. With that assurance, German industry could plan expansion with confidence. Roosevelt was unable to provide such "confidence" to industry and had to rely on anemic market forces until after the Japanese attack on Pearl Harbor, Hawaii."