Embassies & Trust
A significant change in 1.2 is the removal of embassies and the passive opinion increase they provided. In the “Asimov” update, players will have to gain trust by cooperating with the AI. Trust is gained over time by having some sort of treaty with the AI.

Embassies & Trust
A significant change in 1.2 is the removal of embassies and the passive opinion increase they provided. In the “Asimov” update, players will have to gain trust by cooperating with the AI. Trust is gained over time by having some sort of treaty with the AI. 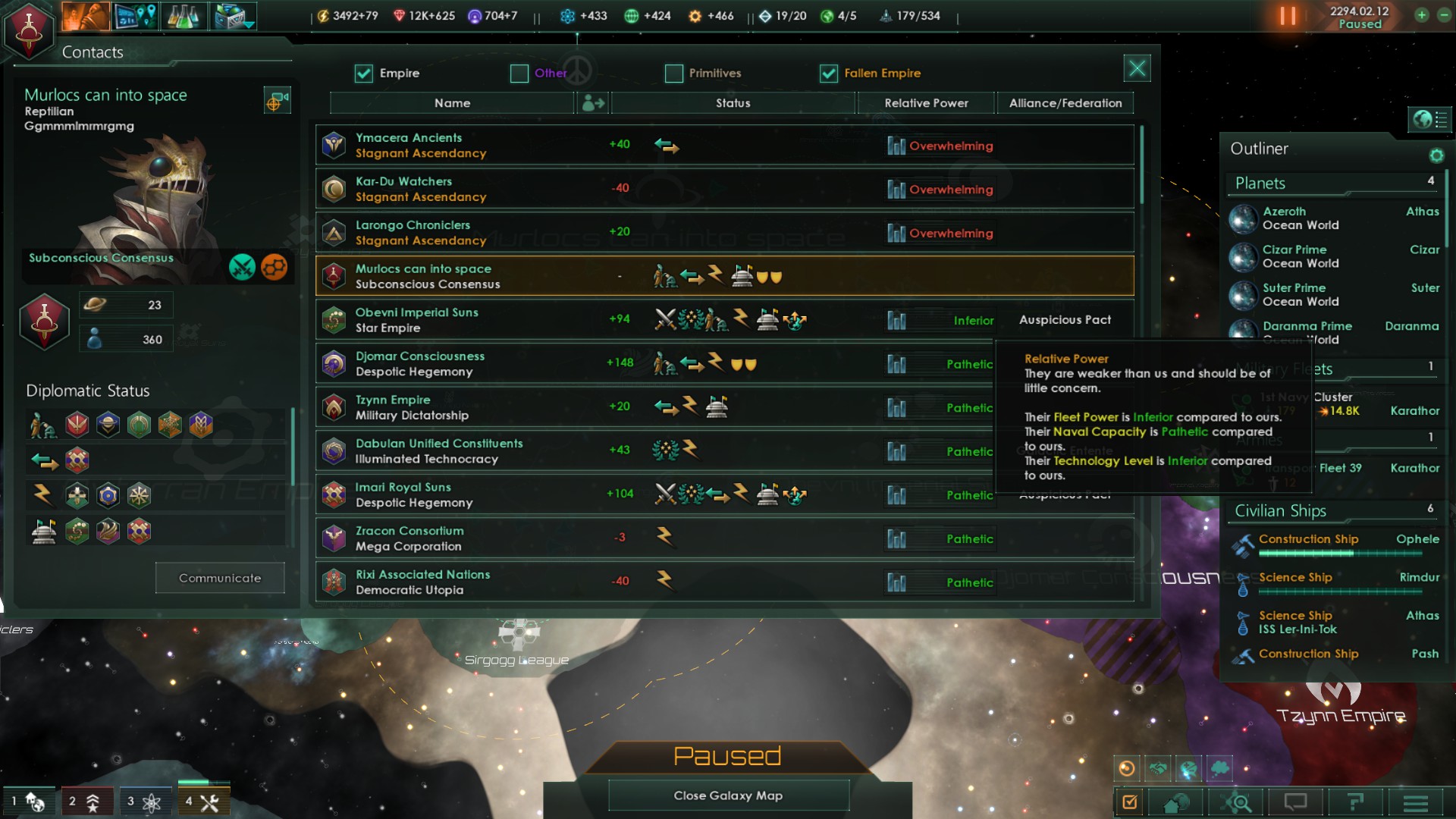 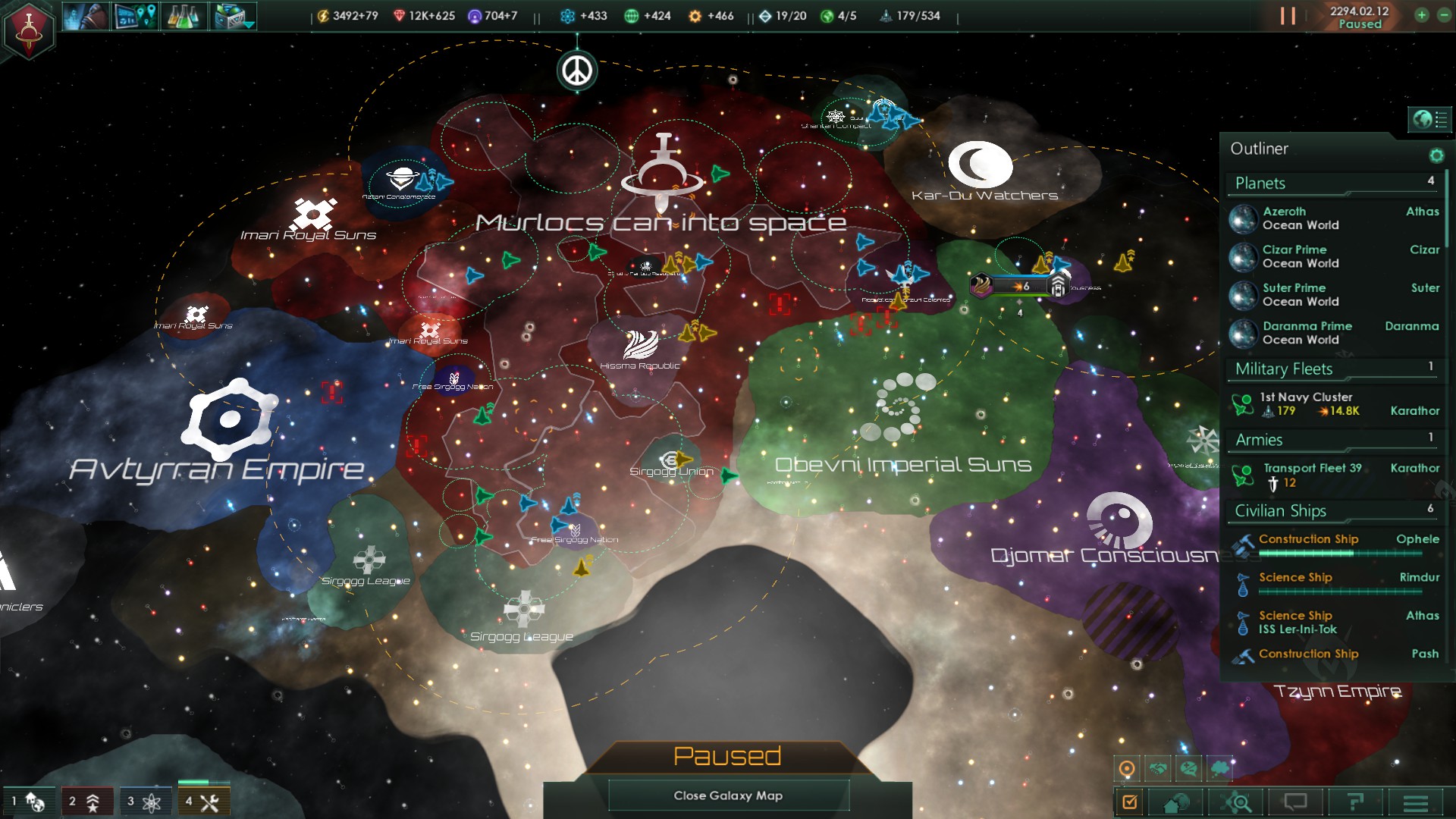 The Theoretical Loadout
So, with the explanations out of the way, how should you actually be composing your fleet? It's clear that 100 battleships with large missiles is a mistake, no matter how cool it looks, but what should you be using instead?

Before I get too deep into it, remember that this is a theoretical, catch-all loadout, and that once you understand how ships work you may want to consider designing your fleets to counter your closest neighbors. If everyone around you is using laser weaponry and shields, then you should definitely specialize to punish them. However, if you're just getting started, here's what I would suggest.

For every Battleship in your fleet, build around 2-3 cruisers, 7-10 destroyers and 12-15 corvettes. This gives you a few larger ships to deal with bigger threats, both in terms of damage and accuracy, with a screen of smaller ships to take out whatever the larger ships can't, and to take the brunt of the damage. corvettes will be destroyed regularly, but they're cheap and quick to replace, so it's worth sacrificing them to protect your larger Battleships. Battleships are great at dealing with stations, and will also provide passive bonuses that help your entire fleet out, so a battleship for every dozen corvettes lets you spread the love around.

You want to make sure that the core of your fleet is able to do plenty of damage, while keeping specialized ships around for specific purposes. You want at least half of your fleet to be pure damage dealers, perhaps even up to two thirds, with the remainder being specialist ships. Specialist ships should deal with whatever your core ships can't deal with, with a strong emphasis on point defenses to protect you from missiles. Treat your missile carriers as 'specialist' due to how hard their counter is. Consider these basic ship loadouts:

Your Corvettes will mostly want to deal with other corvettes and perform double duty as ablative armor for the rest of your fleet. Their main advantage is small size and high evasion, while low starting HP makes armor pretty useless for them. So load them up with shields to absorb as much damage as possible. 3 small weapons will give them the greatest amount of firepower to deal with their enemies, or to protect your own fleet in the case of point defenses.

Destroyers are your mid-range ship, and you should be confident in using them to deal with basically anything. They have enough HP and room for defenses to be somewhat survivable, and can also carry everything from small to large weapons. Your main damage dealing destroyers can be fitted with 2 small and 2 medium weapons to keep up firepower and deal with other destroyers.

You probably want to keep some destroyers as point defense ships to outlast your corvettes, in which case use 2-3 point defenses, and fill the rest with small or medium weapons of your main type. Later in the game you might also want to consider mixing in a couple of large weapons destroyers, to give you a bit of extra damage against top-heavy fleets and stations. Like corvettes, you want plenty of shields on destroyers, and armor only to fill in the gaps (i.e. when generators and shields balance out, but you have 1 spare slot).

A cruiser with the above build should have high damage output and defense against everything but corvettes. I recommend taking 2 of these, and if you want a third cruiser, that can be your specialist ship. A specialist cruiser can be built either as an anti-corvette ship (6 small weapons, 1 medium weapon, 1 hangar) or a missile ship (4 medium missiles, 1 large missile). Cruisers are a hefty damage dealing ship that should provide strong backup for destroyers to deal with larger threats.

With 6 large weapons, your battleship is specialized against cruisers, other battleships and stations. With high damage it should make short work of anything it can hit. Eventually you should unlock special, large-only weapons, which are ideal for battleships, and what this build is based on. The large amount of armor provides damage reduction, and the nanobot cloud will heal hull damage dealt to all of your ships. As long as the battleship doesn't die it can self repair, and repair other ships around it. The shield provides a few extra hp before damage starts hitting the hull, and some defense against lasers.

War Demand Costs
A frequent complaint about the mid and late game in Stellaris is that the warscore costs for taking planets simply do not scale well to the size of lategame wars. You can have a gigantic conflict involving dozens or hundreds of planets that results in only a few planets exchanging hands at the end. To address this, we've rebalanced war demands to still be quite expensive in the early game (when conquering a handful of planets is a significant increase in power) but added numerous ways to reduce the cost as the game progresses in the form of traditions and technologies, allowing for vast swathes of territory to change hands in late-game wars.


Features:
You, Robot: Play Stellaris as a customized robotic civilization, complete with a series of robotic portraits for science robots, worker robots, and more
AI, eh? Aye!: Follow new event chains and story features to lead your robot race to greatness as an intergalactic AI empire; pursue mechanical perfection in the stars
Rise of the Machines: Oppressed synths may rebel against their masters and form new empires -- or you may even discover a fallen synthetic civilization deep in space
Digital Enhancements: New synthetic race portraits, and expanded voice packs for VIR

Kako naj to povem... No release date given, no fucks given.

Kako naj to povem... No release date given, no fucks given. 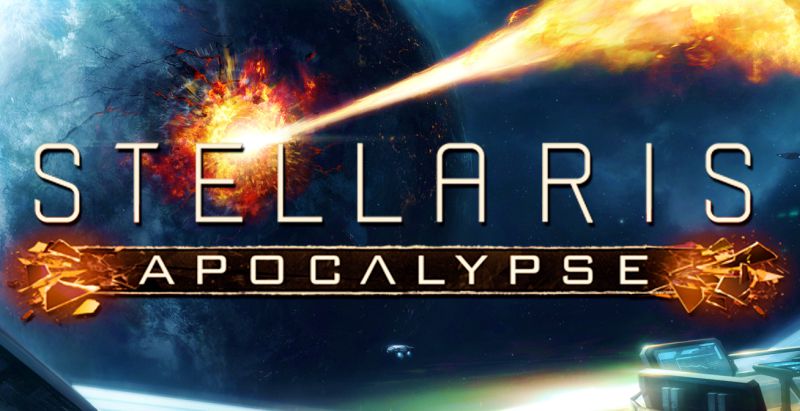