Homefront: The Revolution has been revealed by developer Crytek UK for a 2015 launch on PC, PS4, Xbox One, Mac and Linux.


Homefront: The Revolution takes place in Philadelphia, four years after North Korea claimed America. The city has become a ghetto that is regularly patrolled by soldiers and automated drones, and where civilians live in fear under the oppression of a police state.

Wage Guerrilla Warfare – this is no linear shooter; learn the art of guerrilla warfare and use ambush, infiltration and hit and run tactics against your foe in thrilling un-scripted firefights

Build the Resistance – recruit revolutionaries to the cause, establish bases and safehouses, capture and customise a deadly arsenal, and build
improvised, homebrew weapons for your Guerrilla Tool Kit

Ignite the Revolution – from oppressed citizen to revolutionary leader, an epic single-player campaign tells the story of the second War of Independence. The dynamic, evolving world responds to your actions as an oppressed nation rises up in defiance against the occupation

Online Co-OP – take the battle online, form a Resistance Cell with your friends and earn your reputation as Heroes of the Revolutio The game was re-launched in June 2014 as Homefront: The Revolution, along with the announcement that it would be co-published by Deep Silver.

Koch Media has acquired the Homefront IP from Crytek as well as the transfer of its Crytek UK staffers to Deep Silver's new Nottingham studio. Homefront: The Revolution 'Hearts and Minds 101'


Homefront: The Revolution will be released on Xbox One, PlayStation 4, and PC on May 17th 2016

Someone on NeoGAF has acquired a copy of Homefront: The Revolution ahead of the game's May 17 release date and has posted some early impressions. Long story short, things aren't sounding too hot.


The graphics are underwhelming. Its not bad technically but artistically it also looks bland.

There are technical issues like screen tearing and fps drops. I am not sure if its fps drops or frame pacing issues but the game feels sluggish. Beside that the game crashed once and have other issues like items sticking in geometry etc. Please note that there maybe a day one patch. It wasn't up for me yet.

Movement feels odd and shooting is not satisfying.

AI is also not good.

The world feels huge. You can see Farcry influences everywhere.

At the start of the game it does feel like guerrilla warfare. You have limited resources and have weak weapons compared to the enemy. 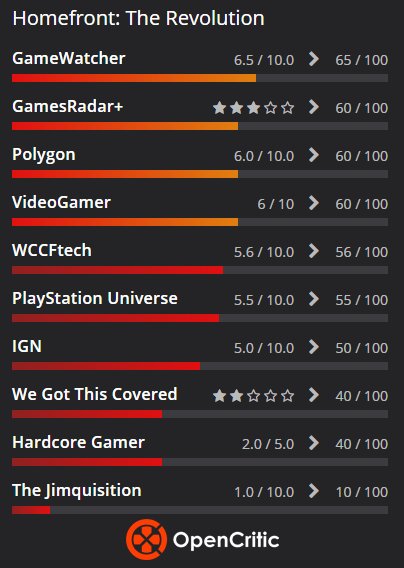 
...closer to an amateur FPS on Steam Greenlight than a professional presentation.

Pa je igra sploh vredna loada?
ANY OF MY POSTS ARE RESEARCHED AND/OR COMPILED BITS OF INFORMATION*
AND YOU SHOULD FOLLOW THEM AT YOUR OWN RISK.
*EXCLUDING SARCASTIC AND OR SUBJECTIVE RESPONSES!

Dej prosim porocaj. Verjetno ta vikend ne bo zneslo, ce bo pa kje poceni bom pa mogoce uzel.
ANY OF MY POSTS ARE RESEARCHED AND/OR COMPILED BITS OF INFORMATION*
AND YOU SHOULD FOLLOW THEM AT YOUR OWN RISK.
*EXCLUDING SARCASTIC AND OR SUBJECTIVE RESPONSES!

ps4?
ANY OF MY POSTS ARE RESEARCHED AND/OR COMPILED BITS OF INFORMATION*
AND YOU SHOULD FOLLOW THEM AT YOUR OWN RISK.
*EXCLUDING SARCASTIC AND OR SUBJECTIVE RESPONSES!
«
1
2 »