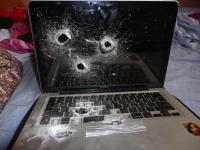 Tole je pa direkt don't fuck with the chuck or else...

Europe, incidentally, is much worse - so outlandish that even The Wall Street Journal has been appalled by the disappearance of democracy in Europe. ...[I]t had an article [this year] which concluded that "the French, the Spanish, the Irish, the Dutch, Portuguese, Greeks, Slovenians, Slovakians and Cypriots have to varying degrees voted against the currency bloc's economic model since the crisis began three years ago. Yet economic policies have changed little in response to one electoral defeat after another. The left has replaced the right; the right has ousted the left. Even the center-right trounced Communists (in Cyprus) - but the economic policies have essentially remained the same: governments will continue to cut spending and raise taxes." It doesn't matter what people think and "national governments must follow macro-economic directives set by the European Commission". Elections are close to meaningless, very much as in Third World countries that are ruled by the international financial institutions. That's what Europe has chosen to become. It doesn't have to.

the debates in the Constitutional Convention are much more revealing. And in fact the constitutional system was created on that basis. I don't have time to go through it, but it basically adhered to the principle which was enunciated simply by John Jay, the president of the ­ Continental Congress, then first Chief Justice of the Supreme Court, and as he put it, "those who own the country ought to govern it". That's the primary doctrine of RECD to the present.

The role of the PR industry in elections is explicitly to undermine the school-child version of democracy. What you learn in school is that democracies are based on informed voters making rational decisions. All you have to do is take a look at an electoral campaign run by the PR industry and see that the purpose is to create uninformed voters who will make irrational decisions. For the PR industry that's a very easy transition from their primary function. Their primary function is commercial advertising. Commercial advertising is designed to undermine markets. If you took an economics course you learned that markets are based on informed consumers making rational choices. If you turn on the TV set, you see that ads are designed to create irrational, uninformed consumers making irrational choices. The whole purpose is to undermine markets in the technical sense.

But there is another part of Magna Carta which has been forgotten. It had two components. The one is the Charter of Liberties which is being dismantled. The other was called the Charter of the Forests. That called for protection of the commons from the depredations of authority. This is England of course. The commons were the traditional source of sustenance, of food and fuel and welfare as well. They were nurtured and sustained for centuries by traditional societies collectively. They have been steadily dismantled under the capitalist principle that everything has to be privately owned, which brought with it the perverse doctrine of - what is called the tragedy of the commons - a doctrine which holds that collective possessions will be despoiled so therefore everything has to be privately owned. The merest glance at the world shows that the opposite is true. It's privatization that is destroying the commons. That's why the indigenous populations of the world are in the lead in trying to save Magna Carta from final destruction by its inheritors. And they're joined by others. Take say the demonstrators in Gezi Park in trying to block the bulldozers in Taksim Square. They're trying to save the last part of the commons in Istanbul from the wrecking ball of commercial destruction. This is a kind of a microcosm of the general defense of the commons. It's one part of a global uprising against the violent neo-liberal assault on the population of the world. Europe is suffering severely from it right now. The uprisings have registered some major successes. The most dramatic are Latin America. In this millennium it has largely freed itself from the lethal grip of Western domination for the first time in 500 years. Other things are happening too. The general picture is pretty grim, I think. But there are shafts of light. As always through history, there are two trajectories. One leads towards oppression and destruction. The other leads towards freedom and justice. And as always - to adapt Martin Luther King's famous phrase - there are ways to bend the arc of the moral universe towards justice and freedom - and by now even towards survival.


"When you tear out a man's tongue, you are not proving him a liar, you're only telling the world that you fear what he might say."

- George R.R. Martin, A Clash of Kings
In the age of information, ignorance is a choice.

pobit vse in vzpostavit pravo demokracijo
Why have a civilization anymore
if we no longer are interested in being civilized?

treba se je znebit fevdalcev
Why have a civilization anymore
if we no longer are interested in being civilized?

"For example, you could make an un-clonable hard disk: the hard disk would act normal if the access pattern for the sectors was somewhat random, like a normal OS would access a filesystem. If the disk was accessed only sequentially, like a disk cloning utility would do, the hard disk could mangle the data, making the clone different from the original."

"For example, you could make an un-clonable hard disk: the hard disk would act normal if the access pattern for the sectors was somewhat random, like a normal OS would access a filesystem. If the disk was accessed only sequentially, like a disk cloning utility would do, the hard disk could mangle the data, making the clone different from the original."