Ti močno svetujem da ne probaš v praksi. Zna boleti.
"I will be quoted in someone's signature,
even if I have to do it myself!" - nurmaln

"I will be quoted in someone's signature,
even if I have to do it myself!" - nurmaln

"I will be quoted in someone's signature,
even if I have to do it myself!" - nurmaln

Mimogrede, Švica je v tem pogledu precej podobna.
Kind of an asshole at first sight, but actually a nice guy
when you get to know me personally. :)


https://www.reddit.com/r/NoNewNormal/co...
We have a chance to stop the lockdowns -- go buy $GME and $AMC with WallStreetBets! Reunite our people! Smash the elite who did this to us!
Activism
For the uninitiated, r/wallstreetbets has figured out a way to fuck over the elites that have been responsible for our financial suffering since 2008, and we as anti-lockdowners need to get in on it to help save some of the businesses that got fucked over heavily by the lockdowns, and put an end to the tyranny once and for all! I'll explain:

TL;DR r/wallstreetbets figured out that big fat-cat hedge funds were shorting $GME, GameStop, and $AMC, AMC theaters -- the same movie theater company that almost went bankrupt as a direct result of the lockdowns. So, they decided to engage in some shenanigans: get everybody to buy up and HOLD GameStop and AMC stock to raise the prices of those stocks so that the hedge-funds would have to re-buy them back at a loss, completely fucking them over.

Some of the brokerages that those hedge funds own a big part of, like Robinhood, Webull, and the like have been stopping regular people from buying GameStop and AMC stock, and even forced people to sell their stocks without their permission and against their will! Robinhood is getting smacked with a class action lawsuit over it!

Everyone in the world is uniting to buy the shit out of these stocks, and to HOLD them, never selling them for any reason, specifically to keep the prices up long enough that the major hedge funds can go bankrupt, and the people can sell them to recoup the money that was stolen from them in 2008. Stolen from them in the 2010's. Stolen from them in 2020 when big business colluded with government to forcibly shut down all of their competitions and to completely destroy the entertainment and restaurant industry.

The same hedge funds who were some of the major players who, in the beginning of last year, purposefully shorted stocks before the public was alerted to the coronavirus.

The same scumbags who made off with a trillion dollars!

The effort is reuniting people like never before. People are putting aside their political differences and are joining forces to stop the elite, to take back the money which they wrongfully stole from us, and to start to rebuild the companies that were almost completely destroyed because of the lockdowns.

And we can do it!

Go get an account on Fidelity or Vanguard. Then, go buy $GME and $AMC stocks, for GameStop and AMC Theater Company respectively. Buy the SHIT out of them and then HOLD them. DO NOT SELL THEM FOR ANY REASON NO MATTER HOW HIGH OR LOW THE PRICE GOES.

The rich has gotten the media to blatantly LIE to break the fellowship and convince people to sell. DO NOT LISTEN TO ANY BULLSHIT YOU SEE ON THE NEWS. GO TO r/WALLSTREETBETS FOR UPDATES.

NO MATTER IF YOU ARE LEFT OR RIGHT, RED OR BLUE, BLACK OR WHITE, REMEMBER THAT WE ARE ALL AMERICANS, THAT THIS IS OUR COUNTRY, AND THIS IS OUR ONE CHANCE TO COME BACK TOGETHER AGAIN.

THEY CAN'T TYRANNIZE US IF THEY ARE FUCKING BANKRUPT!

SO LET'S TAKE THAT SHIT BACK, ROME STYLE, AND TAKE $GME AND $AMC TO THE FUCKING MOON! 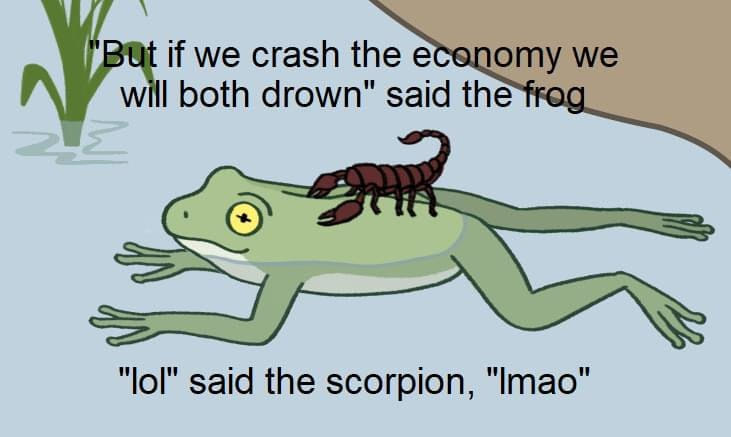