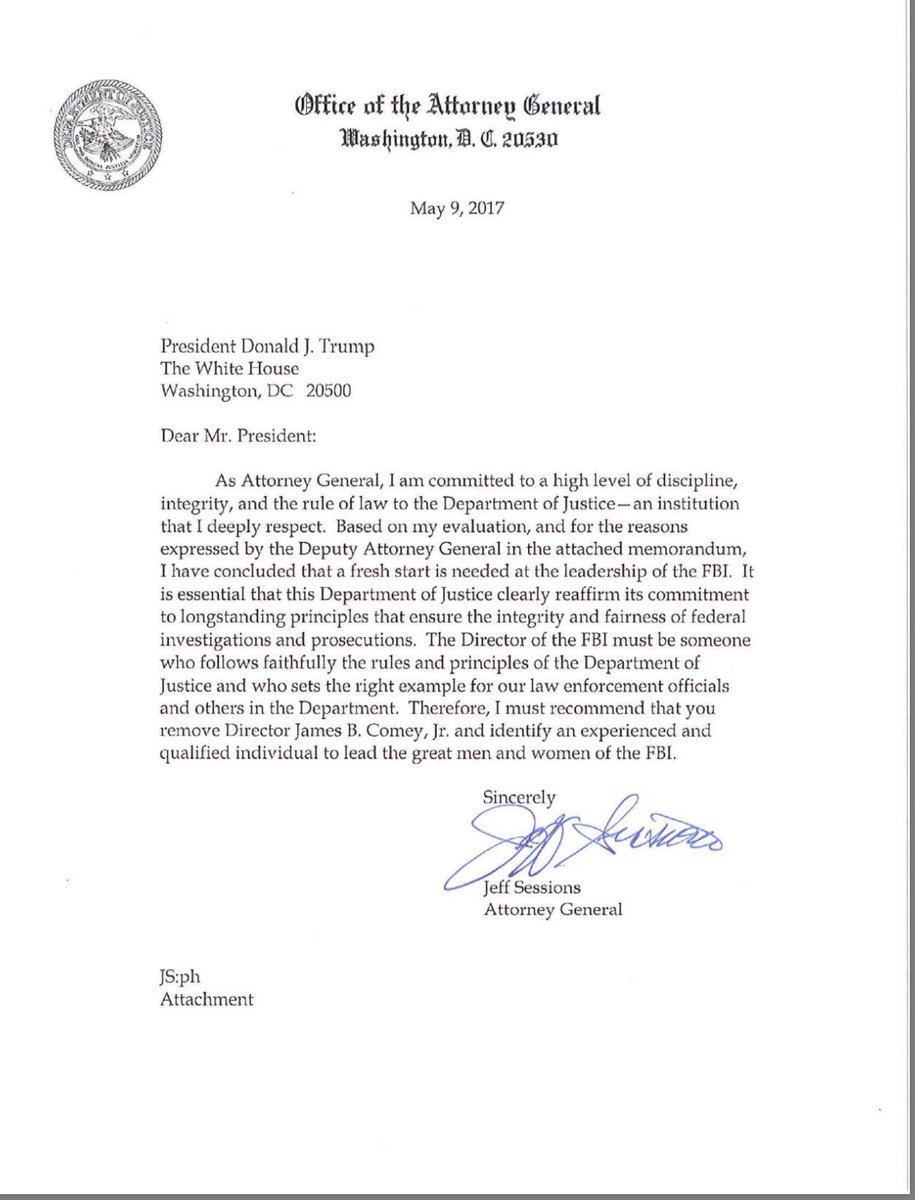 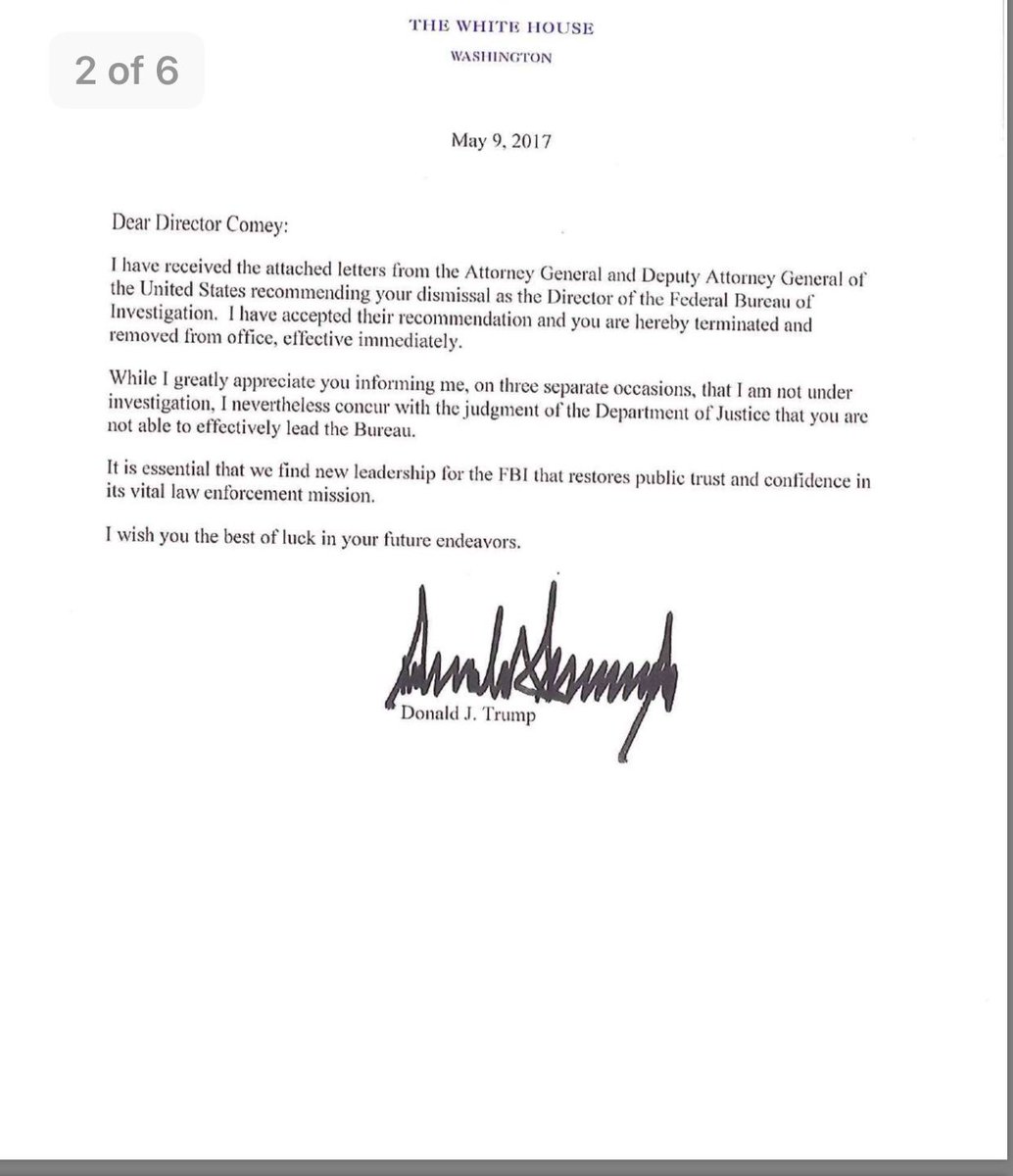 If true, a Constitutional Crisis is in progress...

I am at a loss for words.

Though COUP comes to mind.

Firing your secret police chief because he's investigating you is the stuff of banana republics. America as I knew it is gone.

Trump has either BIGLY Saturday Night Massacred himself here...or he's consolidated power & is beyond any law. We'll know soon which it is.

- Now that's a President.
- Good for Trump!!!! What a leader!
- WIN WIN WIN! Time to go after the Clinton crime ring!
- Now get a real person in there to investigate Hillary.
- Excellent decision Mr President. Another Obama cl0wn gone from the swamp.
- Ladies & Gentlemen, this is How a real US President Acts.
- The libs can't stand the fact that Trump is winning. America is winning despite flakes trying to sabotage things.
- Drain the swamp Trump !!
- President Trump wins again. Weep hard filthy Democrats. A real leader in charge. The illegals are packing now. RUN.....
- Comey admitted lying to Congress. PRESIDENT TRUMP had no choice.
- Keep going, Mr. President. The swamp is wider and deeper than you ever imagined.

Firing your secret police chief because he's investigating you is the stuff of banana republics.

Firing your secret police chief because he's investigating you is the stuff of banana republics.


because he's investigating you

The key player here is Deputy Attorney General (DAG) Rosenstein. I spent 5 yrs in the DAG’s office under Obama. Please indulge me.

Rosenstein is a rare breed – a Bush political appointee who Obama kept on for eight years, as U.S. Attorney for Maryland. Rosenstein was particularly beloved by then-Senator Barbara Mikulski, at whose recommendation Obama kept him. Dems praised Rosenstein at his DAG confirmation hearing, he was confirmed 94-6, and he took office on April 25.

It's no coincidence that the Comey firing took place now. Trump laundered it through Rosenstein to boost its legitimacy. Rosenstein's letter to Sessions blasts Comey's handling of Clinton case in terms that could have been written by a Clinton staffer. But one thing Rosenstein's letter doesn't do -- and it took me a second read to note this -- is expressly recommend Comey be fired.

Sure, it comes very, very close to doing so. The title is "Restoring Public Confidence in the FBI" and it has language like this: "FBI is unlikely 2 regain public/congressional trust until has Director who understands gravity of mistakes & pledges never 2 repeat." But it never expressly recommends that POTUS fire Comey. Is this deliberate? Who knows.

Quite possibly Rosenstein, like most of us, thought Comey screwed up but didn't want him fired with Russia investigation pending. Yet Sessions wanted a memo on Comey's sins, and Rosenstein felt he had to oblige his boss...as long as he didn't have to expressly say something he didn't believe, i.e. that Comey should be fired now.

I suspect that the letter's final paragraph -- whose sentences fit together awkwardly -- was highly negotiated.

Why does any of this matter? Sessions is recused from Russia, so it falls to Rosenstein to decide whether to appoint special counsel. Rosenstein is no dummy. He knows that no one buys that Trump/Sessions wanted to fire Comey for actions they praised at the time! And he cares about DOJ's reputation. He's not a hack -- he's been at DOJ for 27 years, under five different presidents.

Note his language about the FBI -- he worries that it now lacks "public and congressional trust." Same could be said now about DOJ. Appointing a special counsel would help DOJ regain that trust -- both with the public and with Congress. Sure, he's not likely to get much pushback from this Congress, but if Dems win House or Senate in 2018, all hell could break loose.

Comey did the wrong thing on 10/28 because he feared hell from Congress. Rosenstein could do the right thing for the same reason! I think he'll do it. Would it shock me if he didn't? No, because after 2015, as you may have noticed, shock ceased to be a thing.

Dame in gospodje, predsednik of the USA: 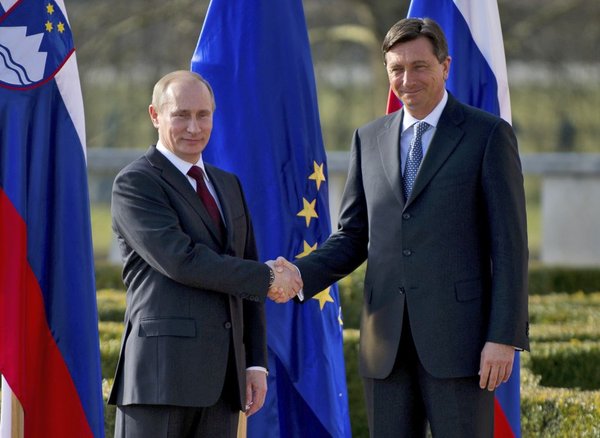 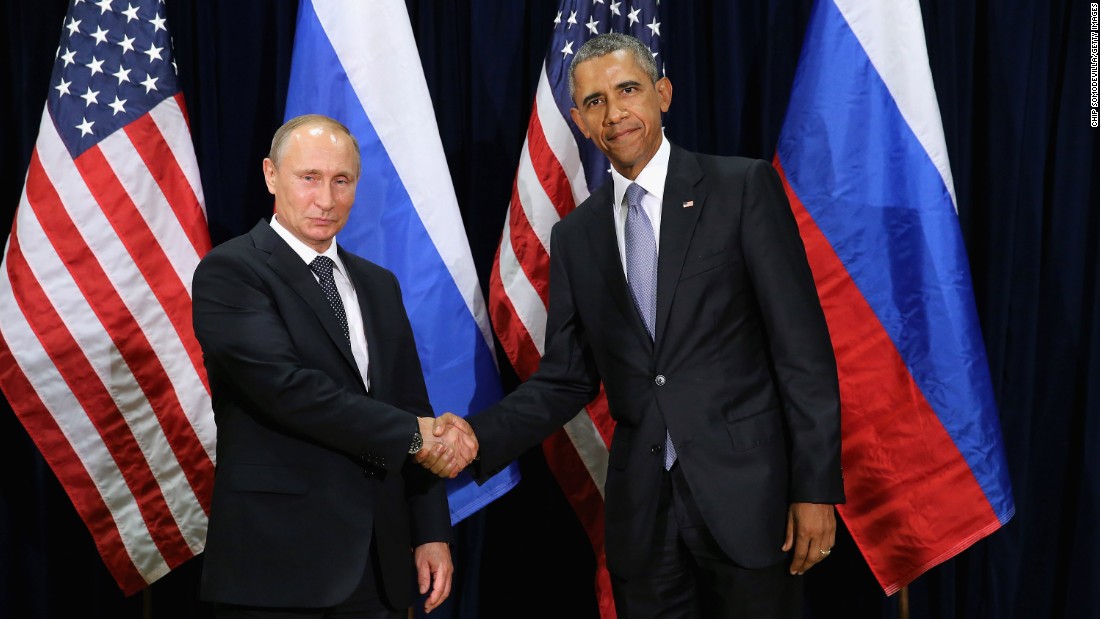 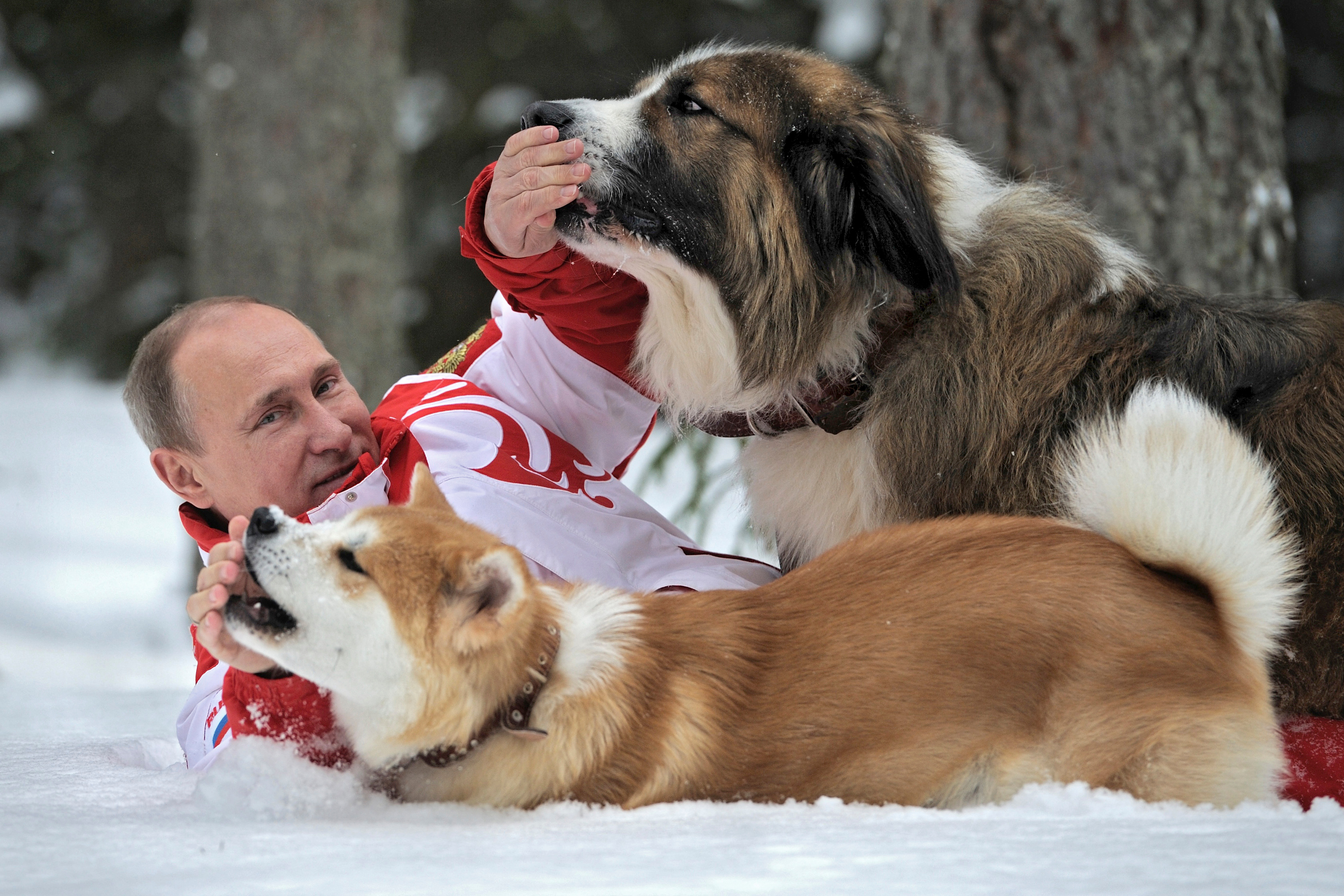 I bet nobody has the heart to tell conservatives what happens to the fully operational battle station.

I bet nobody has the heart to tell conservatives what happens to the fully operational battle station.

Putin is the BEST 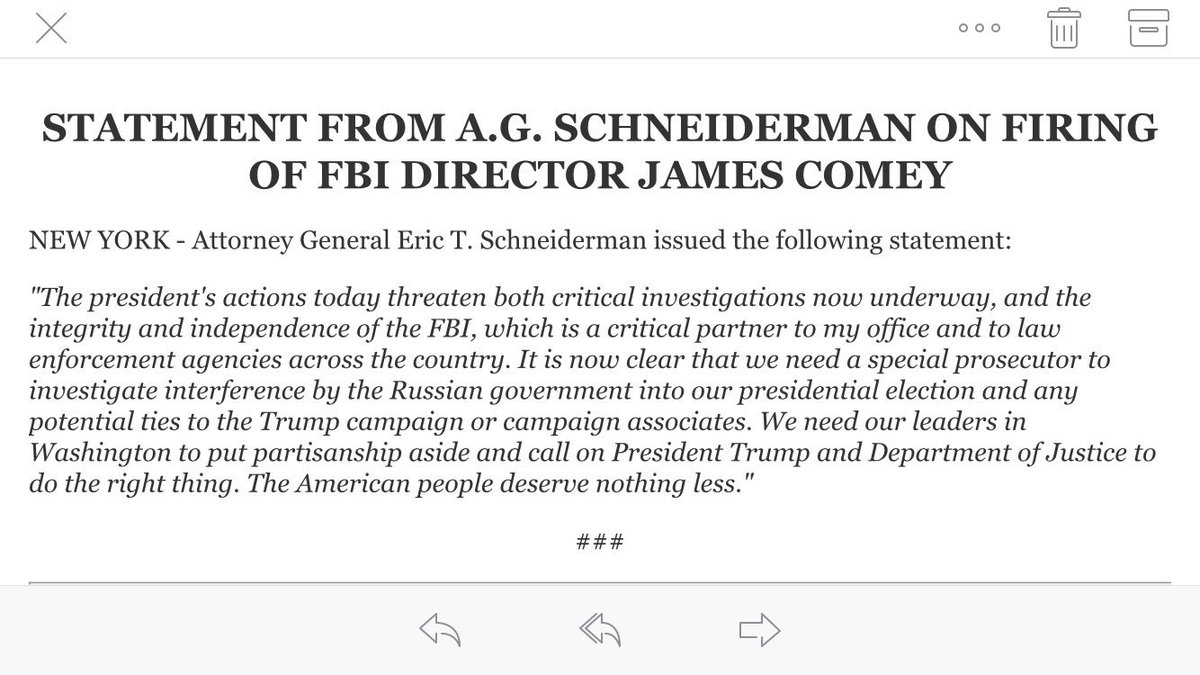 President Donald Trump weighed firing his FBI director for more than a week. When he finally pulled the trigger Tuesday afternoon, he didn’t call James Comey. He sent his longtime private security guard to deliver the termination letter in a manila folder to FBI headquarters.

But the fallout seemed to take the White House by surprise. Trump made a round of calls around 5 p.m., asking for support from senators. White House officials believed it would be a “win-win” because Republicans and Democrats alike had had problems with the FBI director, one person briefed on the administration’s deliberations said.

Instead, Senate Minority Leader Chuck Schumer (D-N.Y.) told him he was making a big mistake — and Trump seemed “taken aback,” according to a person familiar with the call.

By Tuesday evening, the president was watching the coverage of his decision and frustrated no one was on TV defending him, a White House official said. He wanted surrogates out there beating the drum.

Instead, advisers were attacking one another for not realizing the gravity of the situation as events blew up. “How are you not defending your position for three solid hours on TV?” the White House aide asked.

At FBI headquarters, one senior official said the bureau was essentially in lockdown, not answering calls flooding in and referring all questions to the Justice Department. “I got nothing for you. Sorry,” said the official. “We were caught totally off guard. But we are not commenting in any kind of way, and referring calls to DOJ.” 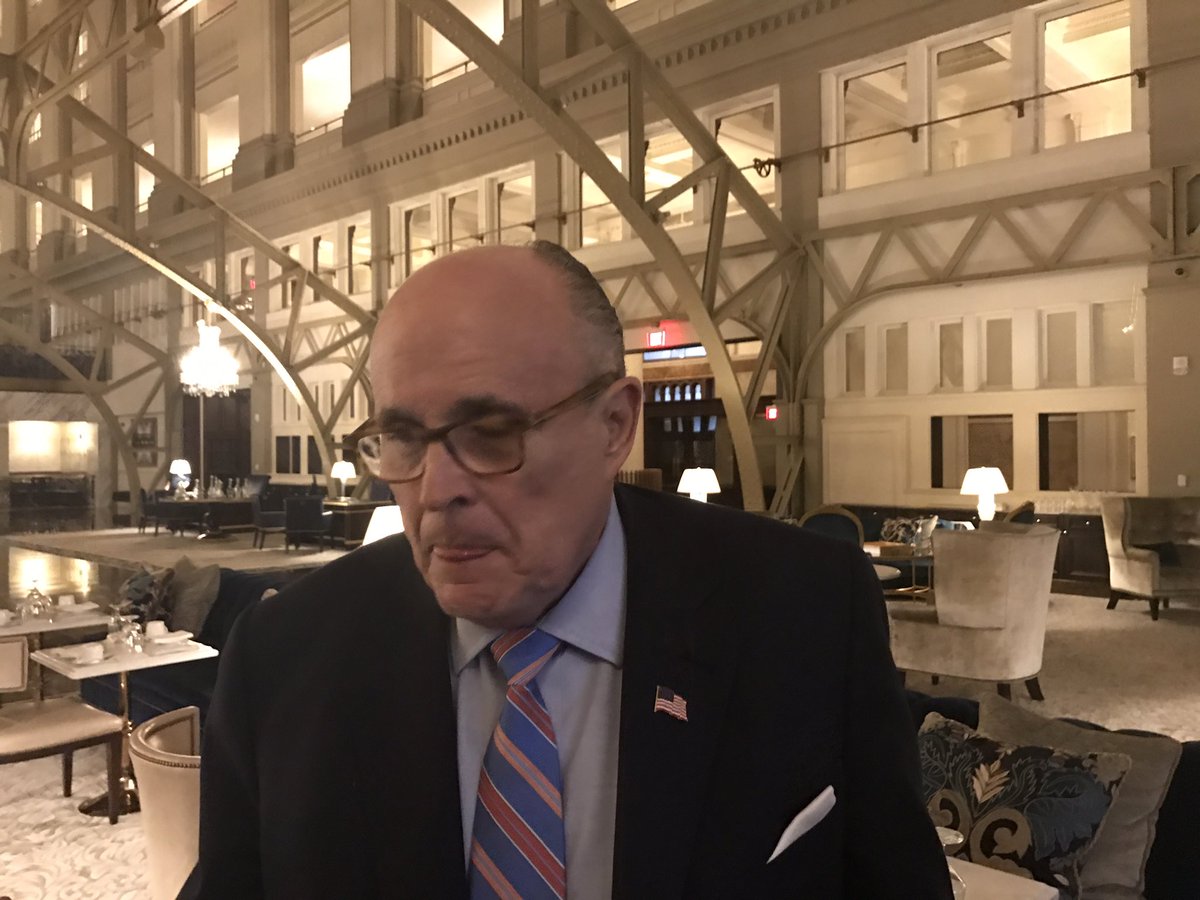 Giuliani tells me and @RosieGray that he is not a candidate for FBI director.
...
blablabla
...
Just now: a source close to the president tells me Giuliani is 100% in consideration for the position.

Fox News announcing on air right now that they're not using Russian photos of Trump-Lavrov meeting, after WH photogs were shut out.

https://twitter.com/ZeddRebel/status/86...
Comey not testifying tomorrow. This is why he was fired now. To get this immediate result.


COMEY will NOT testify at Senate Intel tomorrow as previously planned, but growing calls among Dems on panel for Comey to testify publicly

Democrats hold a 16-point lead over Republicans in a generic House ballot, according to a poll released on Wednesday.

The Quinnipiac University Poll found that 54 percent of respondents said they would like to see the Democrats control the House of Representatives, while 38 percent said the Republicans. Eight percent said they did not know or had no answer. 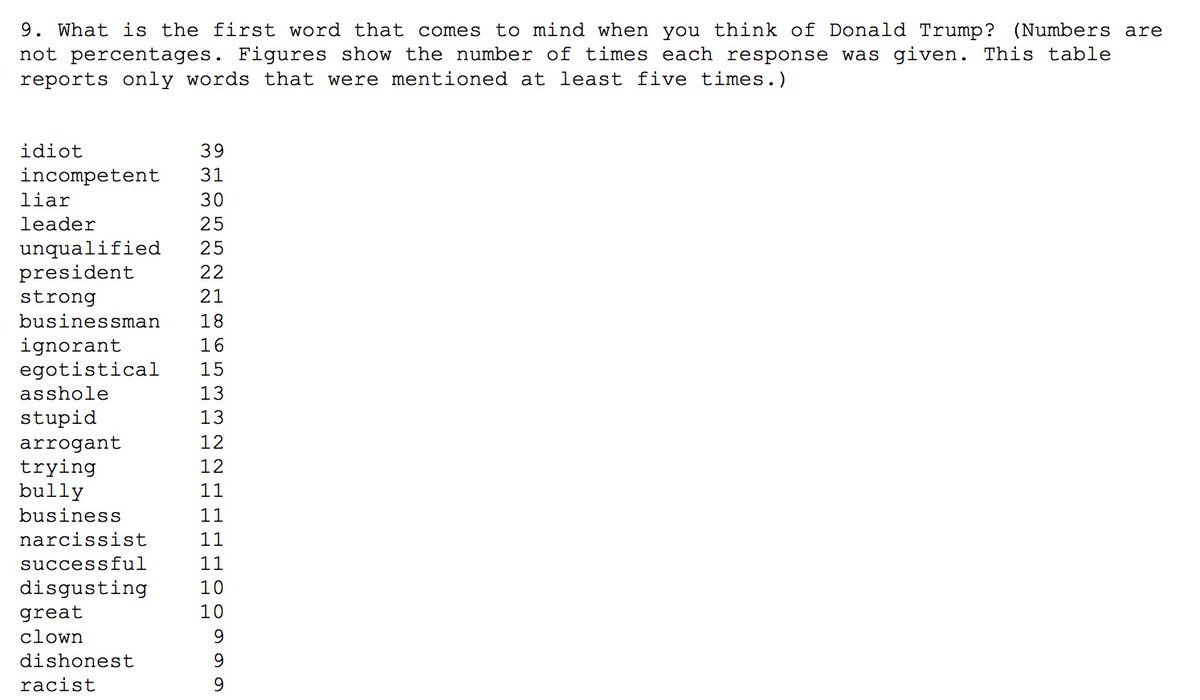 While everyone's busy looking elsewhere, the GOP just LOST the CRA methane rule vote 49-51. Bc Senators McCain, Collins, Graham voted NO. Get the picture? They never cared, even vaguely, about environmental votes. But they voted no. Do the math. Shall we take a bet now that when push comes to shove, to stand up for country, those will be the names? McCain, Graham, Collins.

Remember when there were no grand juries, no subpoenas, and no contacts with Russia, ever? Good time.

There is a lot of intel in the wind tonight

Oh, man. There are a lot of clickservatives who are going to have to eat a massive shit sandwich.

My phone is hotter than the surface of the sun.


Last week when Trump thought he could order Comey to shut down the grand juries-the response was "you'll have to fire me". Comey was ready.

Some good news for the Trump family: According to my sources-there is no reason to believe that Tiffany or Barron will face jail time.

Source: Comey's firing timed to coincide with his trip to Los Angeles in order to gain immediate access to Comey's computer systems/files.

I've spoken with several sources on this trying to gauge mood. Everyone's pissed. They are uniform in their outrage. 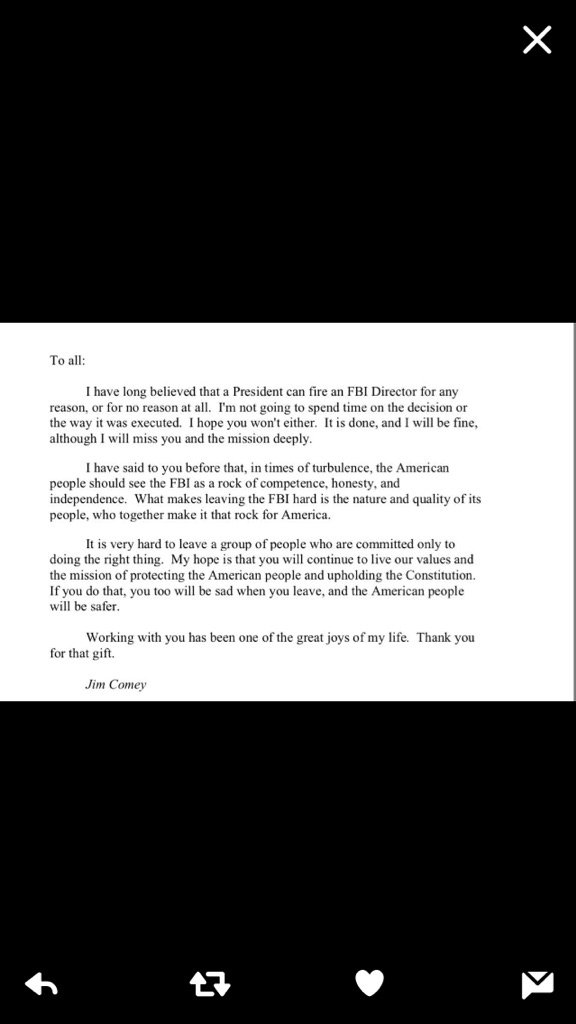 Source close to investigation, cannot confirm/deny arrests as early as tomorrow...but..."Comey dismissal is a catalyst for action".

A trusted source says that Rosenstein is a "straight shooter". Frankly-I don't much about him-but I know my source so I'm going with that. 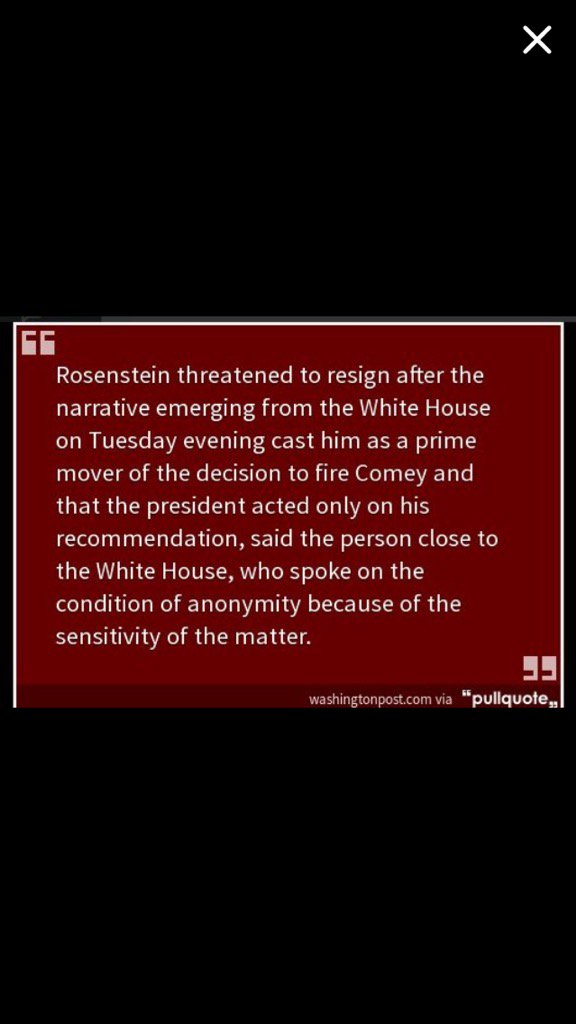 No word yet folks. Still can't confirm for today but...All the players have donned body armor and are waiting for the bugle to sound. If not today-it's soon. Prosecutors are not going to sit on that many sealed indictments indefinitely...would welcome thoughts of @lauferlaw

Trump took his best shot. Soon, the professionals who are upholding the rule of law will, "Cry Havoc and Let Slip the Dogs of War".