As it is now known, the freenode IRC network has been taken over by a Trumpian wannabe korean royalty bitcoins millionaire. To make a long story short, the former freenode head of staff secretly "sold" the network to this person even if it was not hers to sell, and our lawyers have advised us that there is not much that we can do about it without some of us risking financial ruin. Fuck you Christel, lilo's life work did not deserve this.

Freenode staff have stepped down. The network that runs at freenode.org/net/com should now be assumed to be under control of a malicious party. Andrew Lee will likely gain control over the NickServ database at some point.

I joined freenode staff a bit more than 10 years ago, after having used
the network for already roughly 5 years by that time.
During this time, I enjoyed supporting our communities in various roles;
I met some of you through first level support,
through my work for the groups team or due infra work.

I still think that freenode as a network is a great idea,
and offers projects and groups of any size a possibility to collaborate,
coordinate or just chat freely and for free.

Since these early times, freenode changed form a couple of times.
The whole work was, however, always done by unpaid volunteers
that grew into close friends over time.
All the servers we have and all the paid services we use
were sponsored by either companies or friends and allies.
We never wanted to be, never were and never will be a business.

A couple of years ago, christel, now former head of freenode staff
sold `freenode ltd` (a holding company) to a third party,
Andrew Lee, under terms that have not been disclosed to the staff body.
This was done, from what we were informed, to organize our freenode
#live conferences, that required a legal body.
We were repeatedly promised, by both christel and Andrew Lee,
that neither the holding nor Andrew Lee would have any operational impact
on freenode the IRC network. We gladly forwarded this to our users,
who were understandably concerned as well.

In the past few weeks, this has changed, and the existance of a legal threat
to freenode has become apparent. We cannot know the substance of this legal
threat as it contains some kind of gag order
preventing its broader discussion within staff.
The democratically elected heads of their respective teams,
development, infrastructure, projects and communities
were removed by force and have been informed that they are not
entitled to act in their respective capacity.
As a result, Mr Lee wants and partially has operational control
over the freenode IRC network now.
This goes against my personal values, beliefs and rules,
this goes against what we have been doing for the past 10 years,
this goes against our promises to our users and communities.

Due to a leak of a personal resignation letter draft,
Andrew Lee learned of the situation and asked democratically elected
freenode volunteers to step down from their position, as seen in the
logs linked on ...

Included in these logs are also logs from third party users that show
that associates from Mr Lee, namely the user rdv, contacted
various people and offered them oper access on the new network
for money or revenge. It sickens me to the stomach to see our community
that we built in the last 20 years to be lost to this kind of management.
As you can imagine, the community was unhappy as well and we got loads
of feedback. Thank you very much, this means a lot to us. We've also seen
channel ops standing up to the potential new management, see e.g.

This really means a lot to us, but unfortunately reality sometimes looks
different, especially when lawyers and potential lawsuits were involved.
A contract in which christel, former head of staff, allegedly sold freenode, surfaced.
And while I personally think that this would have neither included any servers
or code or user data, since that did not belong to christel to sell, I am not a lawyer
and apparently some of our volunteers got pressured very hard and their personal life
could have been ruined easily should we have fought against this apparent contract.

As you can imagine, this kind of proceeding makes me even less want
to spend any of my volunteering time for the potential new management,
and I wouldn't want to be responsible for sensitive user data under that management, either.
Therefore I, along with my colleagues, resigned from my volunteer position
as a freenode staffer. I had all my access removed, so that I could not hand
it or any data over to a third party, even if I wanted or if I were forced to.

Where will we be going from here?

We are founding a new network with the same goals and ambitions: libera.chat.
It is backed by a swedish non-profit which lets us hold the name,
domain and various other assets to avoid a hostile corporate takeover.
It allows us to continue to operate the network as unpaid, neutral volunteers.
It allows us to ensure that your personal data does not end up as an
asset to some company that could consider monetizing it.

You can connect to the new network at `irc.libera.chat`,
ssl port 6697 (and the usual clearnet port).


We're really sorry that it had to come to this.
When we told you that freenode ltd. and Andrew Lee / PIA / LTM / ...
won't have any impact on freenode,
we always communicated based on what we knew and what we were promised.

I'm aware that such a move is hard, especially for established communities.
We will do our very best to support you if you plan to join us on libera.

I hope to see the lot of you on the other side,
feel free to contact me on the new network if you have any questions.

A big thank you to my former freenode colleagues, all our users,
projects and communities that acompanied us for more than a decade.
Thank you very much, keep rocking and making the
free / open source software and peer directed communities great.

First and foremost, I want to thank the hard working staff for keeping freenode running during these challenging times. Without you, this wouldn't be possible.

Since 2013, I have been a major sponsor of freenode providing servers and funding through one of my companies. I have no intention to stop this in the future. The rumors of a 'hostile takeover' are simply untrue - I've been the guardian and owner of freenode since 2017, when Christel, the former owner approached me and asked if I was interested in purchasing it, as we had in previous years discussed this.

In April of this year, after Christel had resigned, I was approached by the new Head of Staff, tomaw, who asked if he could have ownership over the domains. I responded with my wish to decentralize the network. Subsequently, I learned I was locked out of the account a few days later. When I asked for access back, I was denied and suddenly a story that I was attempting a hostile takeover began to spread.

At this point, I became worried about the safety of freenode -- it was odd that freenode limited, represented by me, was locked out of freenode's accounts when I used to have access the whole time. After subsequent attempts to get access back, I resorted to reaching out through an attorney.

Finally, tomaw voluntarily handed back all of the accesses to freenode limited. This is good news, as freenode will continue to run as it had with the support it has always had. Furthermore, tomaw and I have engaged in civil discussion as we are both in agreement as it relates to wishing for freenode to continue to be what it has been. I am optimistic these discussions will end with a positive result for the community -- which is the most important participant here.

We're doing this for you, as we have until now and as we will in the future.

We're going to provide more voted representation across all sectors for the freenode userbase and groups that call freenode home. Additionally, we will be opening up the server-link process to be much more inclusive, albeit, by vote (like some of the other larger networks). Finally, in order to remove the strong reliance on a centralized network, we are currently reviewing decentralizing policies including potentially revisiting the nomenclature of servers on freenode (end reliance on a single domain name).

On Sponsorships and Logos

As I have been funding freenode since 2013, there has been a logo of one of my companies or a company I'm involved in on the website. In general, FOSS projects have historically struggled to obtain funding and often times simply showing sponsors on the website helps to alleviate this to some degree. This is no different here. Every company that has appeared on the freenode website has provided financial sponsorship or servers or both to freenode. I want to send a clear message to those who disagree - you're not helping FOSS, and your behavior of ritual defamation is toxic at best. We want to encourage sponsors to help open source developers and communities to be sustainable, not the opposite.

On the Future and Other Communities

I encourage the community to reach out and engage in discussion with the staff in #freenode-staff-discussion at anytime in order to provide input on the future of freenode. For all of the communities who are on the fence about what to do, please rest assured. Freenode is freenode, and it exists for the sake of the FOSS movement.

"It is worth noting that Private Internet Access / London Trust Media formerly owned the Linux Journal and has contributed/donated to various open-source projects. Andrew Lee is also involved in the current Shells.com Linux "cloud desktop" startup, which has been embraced by a number of different Linux distributions. So the interest in Freenode isn't entirely a surprise especially given his history and long interest in IRC. "
Quack !

Tako ali tako pa število uporabnikov IRC-a ne narašča, kvečjemu obratno.
Kind of an asshole at first sight, but actually a nice guy
when you get to know me personally. :) 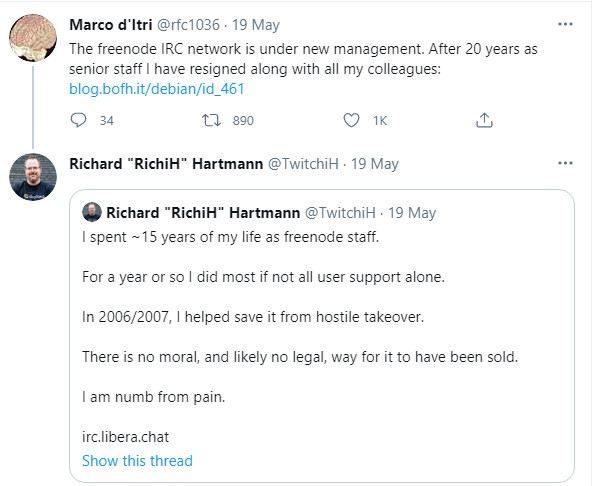 To so tri različne stvari.

@jess: infrastructure is totally donated
@jess: by various volunteering sponsors from many walks of life
@jess: some companies, some individuals, none of our infrastructure currently belongs to the people claiming to own the network
@Fuchs: in case of freenode it was usually potential sponsors contacting us, we told them what we'd need, they provided, we pulled the server into our config management and had a test run, and then included it
@jess: sponsors own the servers
@jess: companies, individuals, etc donate servers to us to run IRC nodes on. the access to those servers is held by the long-term established internal infrastructure team

Na Facebooku se zbirajo patološki narcisi. Morda zato?
Kind of an asshole at first sight, but actually a nice guy
when you get to know me personally. :)