HITMAN: A 360 Degree Visit to Marrakesh Released in a day one edition SteelBook(R), HITMAN: The Complete First Season will deliver the ultimate physical version of the game, with over 100 hours of gameplay. Featuring all of the Season One locations and episodes from the Prologue, France and Italy to Morocco, Thailand, USA and Japan. Play as Agent 47 to take out powerful high-profile targets in an intense spy-thriller story across a world of assassination.

"The disc combines everything we have learned, refined and updated over the course of a 10 month live season. It's the direct result of live input, development and feedback from our players," said Hannes Seifert, Studio Head at Io-Interactive. "Especially for our fans who want to own the game in a box, we've made it a high quality SteelBook box. We also added loads of additional downloadable bonus content to release on the 31st of January for everyone getting this beautiful edition of the game on a disc and everybody owning the digital Full Experience or upgraded versions of the game."

Included with HITMAN: The Complete First Season box is bonus downloadable content:
- 3 Bonus Missions Pack which includes The Icon and A House Built on Sand missions, plus the brand new upcoming Landslide mission.
- Original Soundtrack featuring the original game score
- The 'making of' HITMAN documentary charting the journey from showing the game to our fans for the first time before E3 2015, through to the digital launch in 2016
- HITMAN Requiem Blood Money Pack* which includes the signature Blood Money white suit, white rubber duck and chrome ICA pistol
- The PlayStation(R)4 version includes the 6 additional exclusive The Sarajevo Six missions

HITMAN Episode 5 Arrives On September 27 & Is Set In Colorado In shock news, the creator of Hitman is to be sold off by owners Square Enix and could even be shut down if a buyer isn't found.

What's particularly worrying is that Square Enix has said it's trying to find a buyer for the studio, but if it can't work something out it's implied they'll simply be shut down.
Presumably this is all because the new episodic Hitman didn't sell well enough, although up until now Square Enix has given no indication of its displeasure. As an episodic game there have never been any sales figures to show how well it's done, but the game reviewed well and was popular with fans.


Square Enix bought Io-Interactive in 2009, at the same time as they bought British publisher Eidos Interactive. Until recently that deal had always seemed to work well for Square Enix, but last year belated sequel Deus Ex: Mankind Divided proved such a flop it likely killed off the entire franchise.
The future of Tomb Raider also remains in question, as making Rise Of The Tomb Raider a timed Xbox exclusive lessened its impact. Although a new game is expected to be announced soon, perhaps at E3 in June.
With the Thief reboot also coming to nothing, most of Square Enix's efforts with Western-developed games is now concentrated on making a series of Marvel games with the developers of both Tomb Raider and Deus Ex.

An update from the studio: 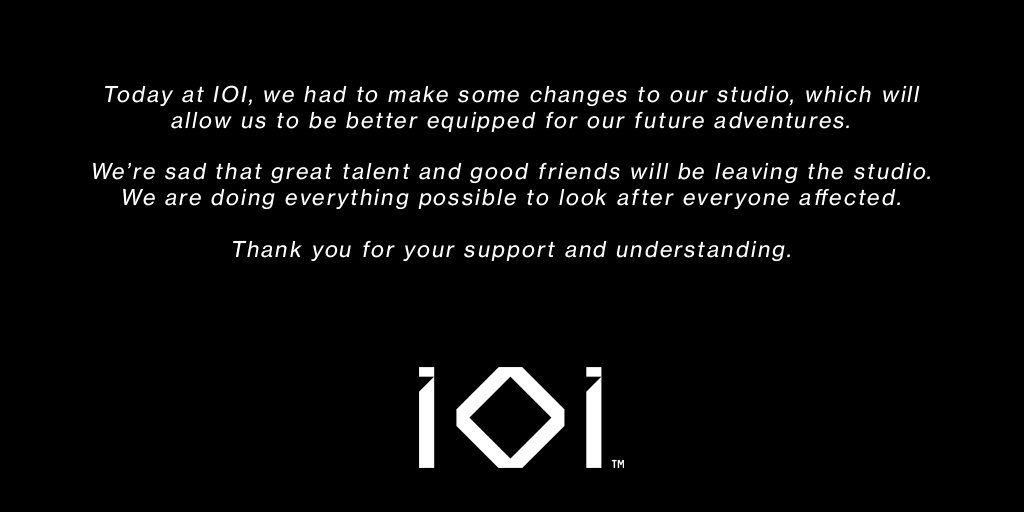 Video games (and Hitman) are saved!

Therefore I am proud to announce today that IOI is now officially an independent studio. We have successfully concluded our negotiations with Square Enix and have agreed to a management buyout. Crucially, we will keep all of the rights to the Hitman IP.

Video games (and Hitman) are saved!

Therefore I am proud to announce today that IOI is now officially an independent studio. We have successfully concluded our negotiations with Square Enix and have agreed to a management buyout. Crucially, we will keep all of the rights to the Hitman IP.

HITMAN - Welcome to The Playground

HITMAN - Play the beginning for free (PC/PS4/Xbox One)

Try HITMAN for FREE and become the Master Assassin!

Play everything in the first location from the game. Experiment, Improvise, try things and have fun: Welcome to The Playground
Anyone who downloads the game for free will have full access to everything included in the 'ICA Facility' location;
- 2 Story missions, including all cut-scenes
- 2 Escalations Contracts
- 40+ Challenges
- 17 Achievements/trophies Io Interactive confirms that a new Hitman is in the works

Looks Like Hitman: Sniper Assassin is Coming to PS4, Xbox One and PC Soon

It's time for another new unannounced game, coming to us early thanks to video game ratings board information listings. This time, it's a new Hitman game rated in Korea.

Hitman: Sniper Assassin was rated by the Australian ratings board back in February, and has now also received a rating on PS4, Xbox One and PC from the Korean Games Ratings Board.

On June 4, the official Hitman Twitter account posted a teaser video that mentions Agent 47's "next target." A blurry image of what appears to be another bald man is visible in the background, and a June 7 date is listed for when the information will be revealed.